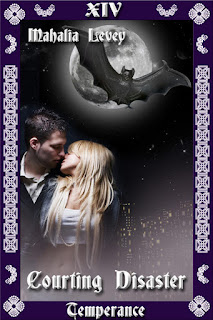 
Additional Prize: For Canadian and US Residents a small bubble envelope of swag, magnets, signed promo cards and other goodies from friends of mine.
Description of book:
Short Novella: Temperance Tarot Card Meaning:  Moderation. Unity, two separate parts merging together to make one whole entity better than the separate pieces.
Sorcha Channing is determined to achieve a positive outcome in her craft. The daunting task she undertakes lands her in over her head. With the help of her familiar Esmie?just maybe she can fix what’s gone wrong.

Macsen Steele is tired of rescuing young witches from the boiling cauldron.  With his enhanced and manipulated DNA, he?s only there to do his job, not fall for the beauty he’s assigned to but can never have.

Log: Alchemy- Fire and water don?t mix. Will the two opposites be able to avert politics aiming to separate them?  Or can passion and respect burn so hard between opposites hot enough to cause a complete melt down.

Short Excerpt:
Heat from the sun?s rays departed and the fiery star dipped below the horizon. Sorcha flitted through Macsen?s mind. Irritated by the troublesome witch, he shrugged her image away as the decaying stench of evil permeated the air. He rose to follow the dark scent that tickled his nose. Stone cracked and crumbled down his naked body much like water sluiced off wet skin.
Under his feet, the roof creaked. Small pebbles pinged from his body while larger rock turned to ash, billowed in the air around him and then disappeared into the night sky. What he needed was a Red Bull to wake up properly. With stiff steps, he moved up the slope onto the highest peak and scrutinized the land below him.
Traversing one lifetime to the next, with a new coven for each stop, he paid a penance for his sinning parent whose choice damned him for eternity. His assignment to look after the ascending leader?s children, a keeper?a protector until recalled to a new location. Six young women drove him to distraction nightly. One aggravating temptation in particular refused to leave him in peace. From her hypnotic blue eyes, perfect body, to her moon spun silk hair, damn she had him waxing poetic. He snorted and let the sounds of the night give him the clues he needed. Yeah, she was up to no good. Her nervousness washed through him.
?Where are you, Sorcha??
Oh shit. He heard her voice ring loud and clear, the soft sound of her cursing brought a laugh to his lips. He opened the link between them and found her staring?
With a guttural roar, he took flight, cloaking is form in invisibility. Weeding through the panic of six females meant ciphering which squeals were in actual terror and which were in moderate fear. The city below faded away. Enhanced vision showed him their magical trail, one he followed past the parks and out of the city. Macsen sniffed and let out a huff of hot air. Incensed, he headed toward the outskirts of the cemetery.
Wings splayed, he flapped above the quivering girls, trying to remain within their protective circle?upturned earth on one side of them, the thin veil sealing demons from entering earth on the other ripped open. Like a tug of war, the low-level demons edged closer in an attempt to draw them out. His gaze fell on Sorcha?s white knuckled grip on the grimoire and the summoned corpse trying to wrestle it from her hands. What in the hell had she gotten into this time?
He had half a mind to stand back to see what they were made of. When Ekho, the youngest of sisters, let out a wallop of a scream?loud enough to bring in local law enforcement, his decision was made for him. Macsen swooped down into the fray, opened his mouth, spewing acid fire in the demons? direction, propelling them to scurry for cover. In a raspy dialect, he repeated his words, commanding their obedience in returning to their levels. Being smart and sassy with a great sense of humor comes easily for Mahalia Levey. An avid reader of books, she found herself enchanted with disappearing completely into the worlds authors created. One day she vowed to herself she’d be one of them. Then family life came, and college right after. Swayed from her childhood course of action, it took many years for her to get back to that place she held dear as a child. Now she is running full steam ahead to keep up with the many ideas flowing freely. She plans on taking her work to higher levels and expanding her genres. Her main focus is giving her readers variety. Her works in progress include paranormal, fantasy and mainstream romance. Taking characters and watching them grow past what she?s imagined is her true passion
~~~~~~~~~~~
Guest Blog from
Mahalia Levey
So?Many? Ideas! Which? Do? I? Write? First?
Have you ever sat at your desk or on your deck, where ever you are sitting for the moment when multiple ideas just strike?
I have. It can be damned annoying because, I want to drop what I?m doing and take off with the new premise?new storyline that has cropped up out of nowhere.
How in the world do I tamp that impulsive need down?
I have a file on my desktop for blurbs. See I do it kind of backwards. I see an idea in my head. Play with names for characters and settings and make a short premise?a beginning, middle and soft ending. I don?t do much more than that. From there I slap a Title on it and shove it in an ? I?ll get to you in order folder.

I find myself juggling genre?s which is another passion of mine.  So between contemporary, interracial niche, paranormal demon and paranormal shifter, I?ve drummed up a few more military premises I can?t wait to dig into. For now though, I?ve actually made a calendar on what needs to be done by when. It is great though because it gives me structure, and my all over the place?running on tangents kind of quirky mind needs a bit of it to slow down.
I don?t lose the excitement. Sometimes I look at the folder and think hmmm. I need to move a bit quicker so I can get to this one J In any event?I enjoy word weaving and creating stories with characters that are hopefully unforgettable!
Happy Writing and for the readers?.Happy Reading!
~~~~~~~~~~~~~~~