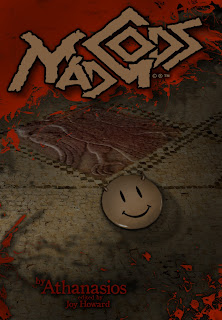 Description of book:
Bible Revelation is metaphorically crucified when the Antichrist refuses his destiny and makes an apocalyptic escape from Satanists, Templars, Dark Nobility & the Catholic Church.
Kostadino Paleologos searches the entire world for a codex that is rumored to catalogue the Antichrist’s past lives and finding it, throws prophecy into chaos.
He kidnaps and raises the infant Antichrist: calls him Adam and teaches what he learned in his search for the Idammah-Gan Codex. He shows Adam that the truth to which every faith aspires cannot be seen because we who comprise these faiths: are flawed. We see, hear, smell, taste and touch with inadequate tools. Even our intellect, on that which we rely to understand is limited; unable to comprehend the totality of truth. Truth is too large -or too small- to absorb; it transcends everything.
In the end the Antichrist sees that religion i.e. faith is outside reason, but whatever solace we get is lost in the translation.

Athanasios works in Montreal as a graphic/video artist, illustrator & writer in dvd production & film. He has been researching & crafting Mad Gods: weaving in factual & rumoured history for over ten years. 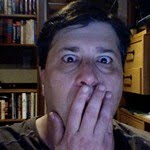 He has been interested in religion & faith since childhood. This led to studying a bewildering variety of beliefs from pagan, wicca, judaism, christianity, islam, to hindu, buddhism, shinto, luciferianism & much more. The interest made its own momentum & brought Mad Gods.
His other interests include most entertainment, from film, to television & books. He won’t try video games for the same reason he doesn’t keep his favourite booze in the house; he would do nothing else. There was a short time that he was into World of Warcraft but that became the obsession he knew it would be. He had to leave it for a deeper & more engrossing one: Mad Gods.
~~~~~~~~~~~
Guest Blog from
Athanasios
Dissecting Mad Gods
Mad Gods dissects two very controversial and compelling topics: religion and entertainment.  It shows the first is just the ancestor of the second.  Its scandals and imperfections hide undiscovered conspiracies that can be so far fetched they seem fantasy.  Religion, conspiracies and fantasy have long been successful topics in fiction and are still extraordinarily popular.
Religion will always be topical, any controversial subject is, i.e. Passion of the Christ, The Da Vinci Code and The Hiram Key have spawned their own industries dedicated to furthering the topics they introduced.  Their debate continues crossing media with television, newspapers and magazines presenting pro and con for canonical religion and the newly rediscovered Gnosticism and Paganism.
Conspiracies have been part of conversation for centuries discussing mysterious forces behind the guts and gears of our societies.  Secret groups, private corporations and shadowy cabals are held responsible for all our woes.  The whispered rumors now appear in newspapers, magazines and television reports with an impressive presence in websites and online forums.
Fantasy has had a long, loyal following with the Lord of the Rings series and experienced resurgence when it hit the theatres.  It is arguably the template for the entire genre of publishing and is also the topic of much media attention.
Mad Gods uses our religions? Gods and Devils and their varied hierarchies in a contemporary setting to engage the audience.  It shows religion, conspiracies, fantasy, music, television and movies are all connected and hopelessly entangled in our history and lives.  It involves the reader with these popular subjects in an innovative fusion that is evident throughout the story.
Kostadino Paleologos roams through mysterious libraries all over the world, to find the mythic Repository of Alexandria, following clues in lost, forbidden texts.   The clues tell of a soul wishing for redemption.  Its many lives protest history?s treatment and look forward to a life more ordinary.  He finds the Idammah-Gan Codex a catalogue of its lives; it is a singularly dangerous book, safely read only in daylight.  He decides to raise the soul?s next incarnation Adam to reject prophesy and teach him the error of religion – the many flaws all religions have in interpreting and explaining faith.  Kostadino?s actions throw all prophesies and revelations into question.  The Luciferian Church conjures and sends demons to find them while the Vatican sends Templars to kill them.
Years later Kostadino and his charge finally evade the Vatican, Luciferians, Templars and Dark Nobility.  They all converge on the unsuspecting rebels and conjure LUCIFER who cajoles, reasons and finally orders Adam to accept his destiny, but he refuses.  With this refusal, Adam becomes every Messiah: the Templar?s Tres Majestus Hermes, Freemasonry?s Maitreya, Xian Christ, all of them.
Kostadino taught his adopted son what he learned while looking for the Repository of Alexandria.  Those far-flung, dusty, old rooms were filled with almost perfect thoughts and nearly complete ethics from the geniuses of history; however, no one had found the whole truth.  All came as close as their backgrounds, or culture, could bring them, but fell short. Kostadino taught him that we cannot see the truth to which every faith aspires because we are flawed.  We see, hear, smell, taste and touch with inadequate tools.  Even intellect is limited, unable to completely digest truth.  Truth is either too large, or too small, to see and we absorb only what we can from each narrow perspective.
This saves the world from the fire, brimstone and destruction, prophesied in Biblical Revelation.  ADAM is still expected to fulfill someone?s prophecy, but will deal with each, individually, as they come.  He will show the followers of prophesy where their faith deviates from truth, as well as revealing how every religion mistakenly espouses their own truth above any other.  Religion has faith outside reason, but loses truth in the translation, hoping that reason can explain faith.  Religion strives to interpret something too vast to be understood. ADAM will show them the error of their ways.  In turn, each religion will have to find their own truth, or come as close to it as they are capable.  It will be a long road.
~~~~~~~~~~~~~~~
How to visit Anthanasios –
Mad Gods Website
Indiegogo Raise Mad Gods Website
Blog
Twitter
Facebook
Goodreads