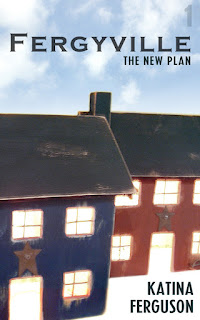 Giveaway a E-book edition
Contemporary Fiction for Adults
Description of book:
Fun, light read. Very short, very entertaining, and yes, there is a cliffhanger at the end. That’s why I wrote Episode 2?so you won’t shoot me.
Synopsis:

Frank and Catherine are parents worn down by three young children, and life. As they try to come up with a new, more efficient, way of managing their lives, they are met with a series of unforeseen obstacles. When Frank gets home from work, things don’t seem quite right. He begins to wonder if some of the problems experienced by his family are in fact the work of malicious people from his past.

Born in Montreal, Canada (to Caribbean parents), Katina feels that her multicultural upbringing has shaped a unique voice for her in the realm of storytelling. Katina describes her initial connection with writing as unexpected. ?My mother gave me a journal for my tenth birthday and after penning a few entries I really felt like ?journaling? was the perfect outlet for my random intellection. I wrote almost every day?. Journal entries evolved into poems, personal essays and short stories.
Presently, Katina Ferguson is a freelance writer and author of the family-themed blog Fergyville. Her e-book, Fergyville Episode 1: The New Plan (of no relation to the blog) is the first to be released in the Fergyville serial novelette installment.
~~~~~~~~~~~~
Guest Blog From Katina
Inspiration Can Come from Anywhere
The Fergyville series is not something I envisioned writing.  I had it in my mind (like most rookies) that I would write an epic fantasy novel; one that was mind-blazing. Yes, that’s what I said?mind-blazing!  People were going to walk around, holding their heads saying, “Jesus Christ! I can’t handle all this awesomeness!”  I even had a concept (something I got from a dream) that had not been done before.  It was a fresh angle on paranormal material and I was really excited about writing it. I was sure that my voice would make me the next J. K. Rowling.
When I started to work on this concept of mine, I discovered something interesting about myself?one of those hidden talent thingies.  I found out that I was extremely creative in the way that I butchered a story beyond repair. I mean really?even I had no clue as to how I took a sure-to-make-me-famous story and turned it into a sure-to-kill-’em-with-boredom story, but that’s what happened.  Everything fell flat, especially the characters, and I put the manuscript to rest in my “crashed & burned” files.
Okay?so back to the general idea that inspiration can come from anywhere.  I talk to my dad every three to four weeks, just to catch up things and see how he’s doing. I tell him about the chaos of having three young kids in the house (what he calls payback), I talk about how tired I am, how tired my husband is and about the car that needs fixing.  For instance, right now, the driver-side door of my car won’t open. Initially I thought someone tried to break into the car and messed up the lock, but my husband was skeptical about my theory. Naturally, I had to open his eyes and make him see what was in plain sight?the multiple scratch marks near the keyhole where the wanna-be car thief (blind as a bat) kept missing the lock and scraped around it.  After having a police officer look at the car, it was determined that there was absolutely no evidence of an attempted break-in (at all).  Those scratch marks by the keyhole all point back to me?oops!  Until we rack up some cash to get the door fixed, I find ingenious ways to get into the driver seat without giving anyone the impression that I’m mentally retarded. Still, I know there were times did not escape that label.
These situations from my life are no big deal to me, but to my dad, they are much more. He’s constantly entertained and because of this, he insisted that I write, “this kinda stuff,” and put it in a book.   I’m glad that I followed through with his suggestion. I’m having a great time writing the Fergyville series and I believe that people are having a great time reading it too. The characters are highly relatable, the story line keeps readers in anticipation for the next book, and as long as I pay attention to my surroundings, there is a constant stream of material.

So yeah, I’m not writing the mind-blazing, 20-part’er, paranormal-themed novel I set out to write, and it’s okay.  Sometimes one doesn’t need to craft an epic story, they just need to know how to tell the ones that are already there.

Where to buy:
Barnes and Noble

RULES:
Participants will be required to do all that is requested under ?To Enter the Giveaway?
All winners will be drawn using Random.org
Winners will be announced on our Blog within 24 hours of the drawing ending.
Winners will also be tweeted by @StacySEaton
Winner will also be announced on our Facebook
Winner will receive an e-mail advising you that you won. You will have 24 hours to respond or your prize will be given to someone else.
Authors have the right to determine where they will ship paperback and hardcopies