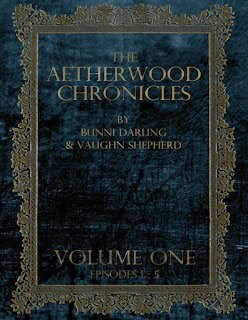 Winner will have a choice of a signed copy or e-book version
Signed copy is a 6 x 9 size and will be shipped worldwide
Adult Erotica – Paranormal Romance
Winners must be 18 years of age
Description of book:
The Aetherwood Chronicles ? Volume I is an anthology of the first five episodes in the Aetherwood Chronicles, a lush, intriguing world filled with sensuality and the supernatural. This anthology combines Episodes 1 through 5, including: Davian and Starr – Episode One: “A Charm”, Pheo and Silky – Episode One: “Aos Si”, Blair and Dresdin: “New Friend, Old Friend”, Davian and Starr – Episode Two: “Twisted”, and Pheo and Silky – Episode Two: “Raising the Stakes”. This anthology includes scenes of graphic sex, and the episode Blair and Dresdin: “New Friend, Old Friend” includes descriptions of violence and torture.

For our blog, we decided to let our readers determine the content by asking questions.

Q: Do you guys have a pre-planned storyline for each of the character pair ups or do you let them run the show and follow them down the proverbial rabbit’s hole to see what kind of roller-coaster ride they take you on?

Vaughn: I think it?s a little of both. Sometimes we have an idea right out the gate of who we want together, and how their story is going to play out. Other times, the characters lead us into surprising territory. That?s the great thing about fiction, you can never quite tell what?s going to happen.

Bunni: I totally agree with Vaughn here, and I have to add I just love it when they surprise us!

Q: How do you guys come up with the stories and keep them all flowing so well? I love the imagination you have.

Vaughn: I think that ties in partly to the previous question. A lot of times, its character led. It?s kind of a schizophrenic feeling, the way that they can drive ideas and motivations. The other part, in my opinion, is the fact that the imagination is like an all-you-can-eat buffet for the mind. If you want something, you can always live that vicariously through your fiction. Writing opens up the opportunity to experience everything you?ve ever dreamed up.

Bunni: Also, we tend to live in each other?s headspace a lot, which helps a great deal when you?re spinning lives and building worlds.

Q: What are Davian and Starr?s concepts about war and peace?

Davian would say that war is a necessary evil, and that the best way to handle such nasty business is to do just that ? make it a business. If people are going to be dying, other people should be making money off of it.
Starr was raised as a flower child, and as such was raised with Peace and Love being paramount. She?s a fairly peaceful soul, but does understand it sometimes takes war to create and maintain that peace.
Q: What do Dresdin and Everett think is critical in making a kingdom safe?
Dresdin is well-versed in the idea that safety means a close eye on the enemy, and little mercy for those who cross the line.
Everett believes in a quiet and strong leadership. He carries a big stick, true, but he doesn?t want the enemy to know he has it. Everett rules with a silken glove hiding an iron fist.
If the Aetherwood characters could get rid of any one person – by sending them away, banishing them, packing them off for a looong holiday, or just plain booting them out, who would it be?
GG. You, the readers, don?t know who that is yet, but you just wait.
Q:What?s coming up for Lion and Mermaid?
Vaughn: One of my favorite series will be out August 26th. It includes Everett?s children, who are some of the most vivid, unique characters to grace my imagination.
Bunni: And mermaids! Those come soon as well- but I have to agree with Vaughn, Everett?s children are pretty darn awesome. Cannot wait to share them with everyone!
~~~~~~~~~~~~~

RULES:
Participants will be required to do all that is requested under ?To Enter the Giveaway?
All winners will be drawn using Random.org
Winners will be announced on our Blog within 24 hours of the drawing ending.
Winners will also be tweeted by @StacySEaton
Winner will also be announced on our Facebook
Winner will receive an e-mail advising you that you won. You will have 24 hours to respond or your prize will be given to someone else.
Authors have the right to determine where they will ship paperback and hardcopies to.