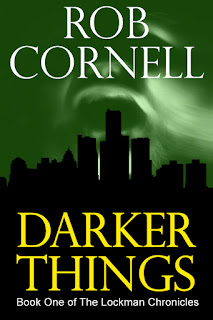 E-book
This book is an Adult – Urban Fantasy
Description of book:
Craig Lockman–no one had called him that in fifteen years.
Not since his days at the Agency. Not since he was trained to kill creatures that were supposed to exist only in nightmares.
Yet the teenage girl on his doorstep not only knows his real name, she claims she’s his daughter.
Before Lockman can learn how the girl found him, he’s attacked by a black-ops team of assassins. But these aren’t ordinary killers–they’re heavily armed vampires sent by his most hated enemy.
Forced on the run, Lockman protects his daughter from an onslaught of horrors while searching for who betrayed him and why. The investigation leads him to Detroit, where he unwittingly sets a plan into motion that could trigger a paranormal apocalypse and cost him his soul.
For fans of Jim Butcher, Simon R. Green, and Laurell K. Hamilton… Darker Things is an 82,000-word urban fantasy loaded with thrilling action, double-crosses, and shocking twists.
Also includes bonus excerpts from Tara Maya’s THE UNFINISHED SONG: INITIATE and Kent R. Conrad’s DEAD FURST.
About the Author:
An accidental nomad, Rob Cornell grew up in suburban Detroit, then spent five years living in Los Angeles before moving to Chicago to receive a BA in Fiction Writing from Columbia College. He has traveled full circle, now living in rural southeast Michigan with his wife, two kids, and dog, Kinsey–named after Sue Grafton’s famous detective. In between moving and writing, he’s worked all manner of odd jobs, including lead singer for an acoustic cover band and a three-day stint as assistant to a movie producer after which he quit because the producer was a nut job.
~~~~~~~~~~~~~~~~~~~
Guest Blog from Rob
“Why I Write”
Authors are asked all the time where they get their ideas, what time of day they write, how their process works. It?s not often they?re asked why they write. So I want to talk a bit about why I write.
A long, long time ago (but still in this very galaxy) a young boy in elementary school was given a writing assignment. He labored over every word until his hand cramped from squeezing his pencil. He declared to his mother then and there, ?I will never be a writer.?
Not much later, he was given another writing assignment. This assignment asked him to write a story about any topic he wished. So he cast some of his classmates in an adventure story where the mismatched crew searches for a hidden treasure, only to discover the treasure is alive! Some of the team members get eaten by the vengeful chest of gold and jewels. Then, this young writer ended his story with the world?s oldest clich?.
It was just a dream!
The narrator wakes up to find himself at a sleepover with the same explorer friends. Only the ones that got eaten in the dream are nowhere to be found.
That little guy had so much fun writing his story, he forgot he was ?writing? at all. He read the story to his class, and they laughed and applauded. When his teacher passively remarked that the story lent itself to a sequel, the boy went on to write, ?The Living Treasure II.?
Fast forward to junior high. That same kid reads Bram Stoker?s Dracula. During a particular scene gooseflesh ripples over his skin. He?s having an actual physical response to nothing more than marks on a page. The special effects and pyrotechnics are all in his head. And it?s the most amazing feeling he?s ever had.
That?s when he decides he wants to be a writer.
Obviously, that kid is me.
Those two separate experiences, along with a teacher?s encouragement to try to publish, changed my life. I grew addicted to evoking emotions in others with story–whether getting laughs like from my classmates in elementary school, or producing chills like I felt while reading Dracula. The Diary of Anne Frank made me cry. Something I had no idea words on a page could do. Stephen King kept me up at night, quivering. Ray Bradbury took me away to other worlds where magic was real and humans colonized Mars.
I wanted to do that for others.
I still want to do that.
Why do I write? Because I want to move readers the same way my favorite writers moved me. It?s all that matters.
~~~~~~~~~~~~~~~~~~~
How to visit Rob –
Website
Blog
Twitter
Facebook
GoodReads