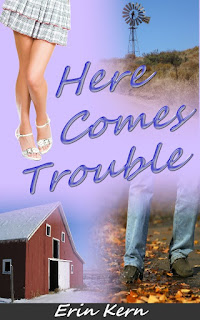 Be the first to read this book!  The release date is set to September 12th!!  Enter to win a copy today and the e-book will be sent to you as soon as it is released!
E-book for the winner!
Contemporary Romance
Description of book:
Lacy Taylor didn’t exactly have a fairytale childhood.  After being abandoned by both her parents, she had to learn to take care of herself at a young age.  Now an independent woman, Lacy finds herself back in Trouble, Wyoming.  Though she isn’t please to be back in the town where her memories were less than pleasant, Lacy decides to make the best of her situation.  Unfortunately her father has recently been released from jail and the county is about to take her house.  What’s a girl to do?
Chase McDermott hadn’t thought about Lacy Taylor in a long time.  To him she was nothing more than the sad little girl who lived across town and followed his brother around like a lost puppy.  Years later, she’s in a bit of a jam and turns to Chase for help.  He goes against his sensibility and offers her a job at his restaurant.  Then money comes up short and things start to go missing.  The last thing Chase wants to do is think Lacy might be stealing.  With a thief among his midst and a woman who turns him on like she never had before, Chase is in a bit of a dilemma.
Lacy has her own problems with the appearance of a half-sister, a major tax problem and a sudden windfall she as absolutely no clue what to do with.  Chase is with her every step of the way, offering his support – and more.  Along the way he has to figure out which one of his employees is stealing before they bleed him dry!
Will the two of them ever get things figured out? Or will they become too distracted with their desire for each other?

About the Author:
I was born in Houston, Tx. and am the oldest of two sisters. After moving around umpteen times, I finally settled in northern California, where I lived most my life, but am finally back home now in Texas. I live in the north Ft. Worth area with my husband, 6 year old daughter and 2 year old son.


I absolutely love to read! With the exception of my family, reading is my one passion I would never be able to give up. I’ve spent countless hours researching some of my favorite authors on Amazon looking for that perfect book to read next. Once I find it, I cherish every page until I’ve reached the end.


Second to my passion for reading is writing. One day, while going about my daily routine of working, chores, and other domesticated stuff, I sat down at my computer and started typing. I typed until every single word, character and setting was out of my head and on the computer screen. Seven years later, I’ve finally published my first book, and I could not be happier what my chosen profession.


This passion of mine was a collaborative effort of some of my favorite authors, including, but not limited to, Linda Howard, Cindy Gerard, Rachel Gibson, Susan Mallery, Lori Foster… I could go on and on but I don’t want this biography to stretch from now until the end of time
How to visit Erin –
Website
Blog
Twitter
Facebook
Goodreads