For those of you who are just joining us, Holiday Siren’s is an event taking place between December 13th and December 23rd. We are sharing some great crime novels with you that were written by law enforcement officers, people who worked around the trade or people who just did some awesome research!  Make sure to join us each day to see the featured book and the featured author!

You write a crime novel – is your writing from experiences that you have had or did you just totally come up with the plot out of the blue?
An Indecent Death is about the investigation into the murder of a sexy seventh grade teacher. Among the suspects are teachers, a janitor, the principal, parents of students and the like. The school setting is a big part of the book, and I chose this because I was an elementary teacher for thirty years. Write what you know, they say. I know schools. The actual crime and police investigative methods I had to research. The plot is entirely imaginary; nothing like it ever happened in my career. What is your experience if you have it?
Is a teacher close enough to a Law Enforcement Officer? Certainly, many times I felt like it! Thirty years as an elementary school teacher teaches you a lot. Where did you do your research?
I used various informative internet sites and spoke to law enforcement officials here in Ontario. How did you develop your characters for this story? Are they people you know, maybe yourself?
I bet every author gets asked this! My characters are fictional but they are based on people I have met. My main character, Detective Sergeant Nicholas Drumm is a bit like me, but not too much. I don?t have diabetes, for example, but I do own a Sheltie, as Drumm does. And he has hair and I don?t! Drumm unknowingly uses malapropisms and I did know a teacher who did that. The janitor of the school is found asleep in his office with his feet in the sink, and that is based on a real incident. I would say that, subconsciously, as I was developing the characters, I was thinking of people with whom I had worked. All except for the victim, a wanton flirt; I never knew any teacher like that. How long did you work on this novel before you published it?
My novel took me about three months, from start to finish.
Have you written other crime novels? If so what are they? If not, do you have plans to?
An Indecent Death is my first novel. I am presently writing A Striking Death, also featuring Detective Sergeant Nicholas Drumm and some of the same characters from the first book. A Striking Death is about the bludgeoning death of a gay man, a retired teacher. I have plans for a series of books with these characters, all to do with education and schools in some way. Rather the same way Dick Francis wrote mysteries about horse racing. The third book is tentatively called A Cuban Death.
Using a character from your book ? Please tell me about your book:
Detective Sergeant Nicholas Drumm was going over in his head what he might say in his upcoming  interview with Thomas Massey, the crime reporter from the York Daily News. Drumm wasn?t in the best of moods anyway, and being obliged to give information to a weaselly scribbler had done nothing to improve his humor. But when the Staff Sergeant told him to brief the media, he had no choice.

Massey wanted an update on the investigation into the murder of seventh grade teacher Paula Noonan, found dead in a local park. The truth was, the investigation was going badly. There were plenty of suspects, but he was having a hard time eliminating them. Paula?s abusive estranged husband, the creepy custodian, her fat and sweaty principal, the angry father of one of her students, that angry fifth grade teacher Don Musjari. There were too many ?persons of interest? for his liking.
Until today they hadn?t had a lot to go on, but the tox results showing GHB in the victim?s urine was very helpful. Yes, that was very helpful. Should he tell Massey about it? No, of course not. He would keep that to himself for the time being.
Drumm rubbed his eyes. He was tired, his blood sugar was low and he was fretting about Emily again. Should he get back together with her, or not? And why was Karl behaving so strangely? Normally a good, solid cop, Detective Karl Wesson was looking a little rough around the edges. Something was definitely going on there.
Drumm realized that his mind was wandering. He looked at his watch and with a start, he realized that he was going to be late for his interview.
Time to get a move on.
Story Blurb from back of book:
“Just the book to sit down with on a rainy afternoon with a cup of hot tea (or toddy). The plot is compelling, the characters are finely-drawn with charming quirks and the sense of place is familiar enough to make the story as unsettling as it is enjoyable to read.”
“I really enjoyed this mystery. It kept me guessing all through the read. Trust me – I usually figure out the mystery before I finish the book. I hope to read more from this author.”
“This is a riveting murder mystery that will keep you guessing to the very end! It’s skillfully written, with such plausible characters that you feel these people could be real. The plot is logically developed to a climax that you won’t see coming! I thoroughly enjoyed reading about Det. Sgt. Drumm’s first case, and look forward to many more.”
When sexy, seventh grade teacher Paula Noonan is found murdered in a nearby park, Detective Sergeant Nicholas Drumm of the York Police Services is called in.
Drumm’s previous experience as an elementary teacher comes in handy when the investigation leads him to Paula’s school, and a host of suspects, including the school’s creepy janitor, an abusive spouse, the principal, a moody and leering fifth grade teacher and the angry and aggressive father of one of her students.
If you are a fan of Louise Penny or Peter Robinson, you will love the twists and turns of An Indecent Death!
Author Bio: 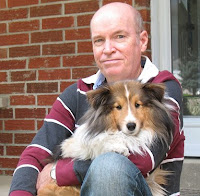 David Anderson was born in Toronto, Ontario, the third child of a Canadian RCAF pilot and an English war bride.  He grew up in Scarborough, Ontario and moved to Simcoe County, about an hour north of Toronto, in 1976. For thirty years he taught in Simcoe County elementary schools, teaching grades one through eight. He lives in a small town in Simcoe County with his wife and Shetland Sheepdog, Wilson.  His first book, “An Indecent Death,” was published in September, 2011 and won critical acclaim. “A Striking Death” is due out in December, 2011.
How can the readers contact you and where can they buy your book?
Amazon US
or
Amazon UK
Website

This book is for mature audiences and does contain adult material which can include profanity, sexual content and violence.
Instructions for Gifting a Kindle book can be found here on Amazon: Gifting Kindle Books