For those of you who are just joining us, Holiday Siren’s is an event taking place between December 13th and December 24rd. We are sharing some great crime novels with you that were written by law enforcement officers, people who worked around the trade or people who just did some awesome research!  Make sure to join us each day to see the featured book and the featured author!
You write a crime novel – is your writing from experiences that you have had or did you just totally come up with the plot out of the blue?
Some of the things that happen in my stories are similar to what I have seen in real life on the job. Now don’t get ahead of yourself.. I’m not saying I work with real vampires, well some of the guys I work with might be, but I have no actual proof, lol….  While I don’t write about any “real” event in exact detail, I do bring bits and pieces of incidents into my book to make them more ‘alive’ and ‘real’.
What is your experience if you have it?
I have worked as a police officer for over 11 years in a small township in Southeastern Pennsylvania. In my stories, I write about the characters living in Fawn Hollow Township, and where I work resembles that area very closely.  It was easy to use what was around me to enhance the story.

Two years ago, I worked hard and went through a year long training that was several days a month to obtain my Crime Scene Investigator certification.  After receiving the state certification, I took a very intense test through the International Association of Identification (IAI) that allows me to carry the title, Crime Scene Investigator, Level 1.  It is something I am very proud of.

I love the forensic part of my job and while I don’t use to much of that in my current series, you will see more of that from me in the future with other novels I am currently working on.
How did you develop your characters for this story? Are they people you know, maybe yourself?
Officer Kristin Greene is the main character in both of these books, she’s me. There is nothing else to say about it.  She is driven and controlling and well… that’s me.  Many of the other characters are based off of people I know and work with.  Alexander and Julian are a mixture of people, so don’t ask who they are… I won’t tell! lol…  Mick in the book is my real life partner, he’s an awesome guy and I love working with him.  I can’t say that the bad guys in my books are people I know personally, made a mixture of people I have met through my life that are evil in some way, maybe not.
How long did you work on this novel before you published it?

My Blood Runs Blue was actually written in 9 weeks.  It took me several months to get it edited and formatted.  I sat down to write it in October 2010 and it hit the market on April 5, 2011.  Blue Blood for Life only took me about 11 weeks to write and was published on September 30th of this year.

Have you written other crime novels? If so what are they? If not, do you have plans to?
These two books were my first two books written.  I have several other novels that I am working on:
Of course the first one is the third book in the series, it will be released in 2012.
Whether I’ll Live or Die is one that I am working on hard right now.  It is a book that is about Domestic Violence and it is seen through the eyes of a victim and through the eyes of the law. This will be released early 2012.
Liveon is a contemporary romance that take a Detective undercover to protect a movie star that has had his life threatened.  This one is kind of on the back burner while I work on some of my other ones. I am hoping to release it in 2012, but I can’t be sure. 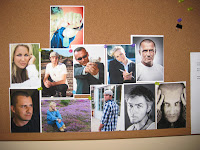 Blue Haze is a huge project I am working on with another author, John Walker.  It is a dark and gritty series that deals with Addictions of all types.  Book 1, is in the writing stages and we hope to have it out in 2012. The female lead is a detective, while the male lead is an x-cop.  It is a very intense novel.
Mismatched is a new series I am working on.  It is only in it’s planning stages, but it will be along the Paranormal/Urban Fantasy route like my current series.  Again taking place in the law enforcement world.
Using a character from your book
Please tell me about your book
My name is Julian Hutchinson and I work for the VMF (Vampire Military Force).  My boss is Alexander Armstrong and while at one time we were best friends, events from our past have torn us apart.  It makes it difficult some times because Alex is the Master of the VMF, so I have to take orders from him.

Our job is to protect vampires and humans from vampires that turn against them all.  For thirty five years Alex and I have been working on a case to catch Damon, a vampire that wants to end our existence for selfish reasons. For all these years he has evaded our grasp, but things are about to change.
When we learn of a new young female being killed, I am sent to Fawn Hollow Township to see if it could be Damon doing the killing.  Little did I know that something else that has haunted me those last thirty five years would come face to face with me.
When my path crosses with Officer Kristin Greene, Alexander and I once again find ourselves at odds with each other, her and our feelings. Memories from the past are pulled up and we are all torn by what we should have done, what we can do and what we will do in our futures.
Our story is filled with twists and turns and up until the very end, none of knew what Kristin would really decide and why.
Story Blurb from back of book:
My Blood Runs Blue:
?I?m still a cop, and my blood runs blue.?

Officer Kristin Greene has always felt that something was missing from her life. Although her job with the Fawn Hollow Township Police Department keeps her busy, she still feels like there is something else out there for her. She soon finds herself investigating a homicide where a young woman has had her throat ripped out. As she begins to dig for the answers, she finds herself thrown into a world she didn?t know ever existed. When the two strong and silent men walk into her life, she finds herself being pulled into a love triangle that has been going on longer than she has been alive. Who are they and why do they keep calling her Calista? Join Kristin as she fights to learn the truth about the recent murder, the two seductive men who have entered into her life and the real truth about herself.

Blue Blood for Life:
?You belong to me? for life??

After a month off, Kristin comes back to work happier then she?s been in a long time. Her new status in life has her solving crimes faster and better than she ever could before. When Alex goes missing, Kristin finds she finally has to reveal the secrets of her life to her friends. Will they be able to stand beside her after they learn all that she has hidden from them? Julian and Gabe stand beside her faithfully as they try to locate Alex. They are surpirsed to find Trent already in Fawn Hollow, but know that Trent may be the only one to do what Alex has asked them to do. As one more choice is taken away from Kristin, she attempts to make the best of it, but finds herself drawn to Trent in a way Julian and Alexander could never compare to. Trent goes to work with Kristin to keep her safe but will he be able to handle all that her police world entails? Can he handle the side of her that she reveals, the one that Alex and Julian know nothing about? When Kristin and Trent uncover the connection between her job and the kidnapping, they are finally able to put the pieces together, but can they get to Alex fast enough? Will Kristin be able to handle rescuing Alex and all that she learns in the process? Join Kristin, Julian, Trent and Alexander as they dive into a new mystery that will have you turning the pages quickly to find out who is responsible and how Kristin?s life is forever changed once again.

Author Bio:
My life is a busy one and that is for certain!
Currently I work full time as a Police Officer for a small township is Southeastern Pennsylvania. While my current position is that of a patrol officer, I spend a lot of my time doing investigations and crime scene processing. Forensics is something I love and I take my job seriously.

I am also a wife to a Police Officer and with our constant schedules life can get very hectic in our home. I have been blessed with two children, a son who is currently in the United States Navy and I am very proud of him for what he is doing and for putting serving his Country. My daughter is a priceless princess who loves to help me market my books to teachers and other parents while she is at school and church.

When I am not working the job that currently pays all the bills I work on my business. Yes, I have my own business too.
I have two Shiloh Shepherd dogs, Garda and Callie. They are a bit different than the standard German Shepherds most people are use to. They are larger and less aggressive and they have more fur! Man do they have fur!!! Garda has a face that resembles a wolf, which makes me love him even more. (You can see by my photo that I wear a wolf pendant). Garda actually means “The Guardian” in Irish. It is also the name of the Irish Police. Rather fitting for our family of officers don’t you think?
In my spare time… I write.
Where to purchase the books:

For more information please visit her website:
Website
This book is for mature audiences and does contain adult material which can include profanity, sexual content and violence.
Instructions for Gifting a Kindle book can be found here on Amazon: Gifting Kindle Books
Instructions for gifting a Nook Book:
http://www.barnesandnoble.com/u/nook-instant-gifts-ebooks-apps/379003333/