For those of you who are just joining us, Holiday Siren’s is an event taking place between December 13th and December 23rd. We are sharing some great crime novels with you that were written by law enforcement officers, people who worked around the trade or people who just did some awesome research!  Make sure to join us each day to see the featured book and the featured author!
You write a crime novel – is your writing from experiences that you have had or did you just totally come up with the plot out of the blue?
Out of the blue! 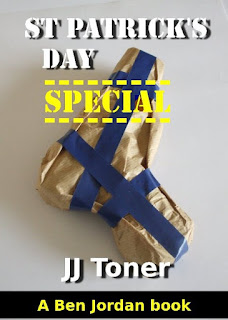 You’re not a police officer so where did you do your research?
Online and by consulting with a friend who is a retired police office.
How did you develop your characters for this story?
Out of the blue!
Are they people you know, maybe yourself?
Totally fictional characters.
How long did you work on this novel before you published it?
A little over a year.
Have you written other crime novels?
No, but I have written 2 other novels, both historical fiction, and I have a store of short stories, some of which are crime stories. Issue #1 of Noir Nation includes one of my creepier crime stories.
If so what are they? If not, do you have plans to?
I’m thinking about a sequel to St Patrick’s Day Special.
Using a character from your book ? Please tell me about your book
My name is Kate. I’m married to Ben Jordan, a Detective Inspector with Ireland’s Organised Crime Unit, based in Dublin. Ben has been working to bring the crime boss Aloysius Lafferty to book for capital murder. You must have read about the case in the papers. Well, since the collapse of the trial I have been living a nightmare. First, we discovered that our 19-year-old daughter, Lucy, has been taking drugs, then Lafferty began a campaign against Ben. He intends to destroy us. As I write this, I don’t know where Ben is. He’s in hiding, accused of corruption and two murders. Without his three closest friends in the Department, Ben would certainly be behind bars right now. He says he can solve the case, get out from under the charges and put Lafferty away, but I’m not so sure that he’ll be able to stay out of jail ? and sober — long enough.
Story Blurb from back of book:
2004 Ireland is Tiger country. Aloysius Lafferty, one of Dublin?s biggest crime lords, specialises in armoured car heists, raids on post offices and ?Tiger? kidnappings. DI Ben Jordan of Dublin?s Organised Crime Unit has spent three years on Lafferty?s case when a lucky break uncovers the handgun used to kill one of Lafferty?s rivals. The trail leads Jordan to the low-life who pulled the trigger. To save his own skin, the shooter agrees to give evidence against Lafferty, and Jordan and his team hide him away in a country hotel.
But before the trial can start, the witness and his minder are shot, and the case against Lafferty collapses. Lafferty is released and goes on the offensive.
And BEN JORDAN finds himself in deep trouble.
Author Bio:
JJ Toner writes all sorts of stuff. He has written a bunch of short stories and several novels. Many of his short stories have won prizes. He has published an eBook of short fun Science Fiction stories called OVOLUTION AND OTHER STORIES. A story from that anthology will appear soon in the first KINDLE ALL-STARS eBook. Two other stories from the anthology have been released as singles. 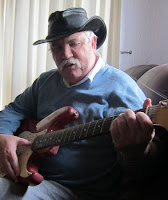 Sometimes JJ likes to write Crime Noir, and you can read “Jelly Babies”, one of his creepiest stories, in issue #1 of the eJournal, Noir Nation.
The thriller, ST PATRICK’S DAY SPECIAL, the first Ben Jordan book, is available as an eBook and will appear as a paperback shortly.
Two of JJ’s unpublished novels are historical fiction, and he is working on a dystopian novel for Young Adults.
He lives in Ireland with his wife and youngest son. All the proceeds from JJ’s eBooks on sale so far are donated to his favorite charity, ASDI, who work with autistic adults in Ireland.
How can the readers find out more about you and buy your books?
Amazon UK
Website
Testimonials:
?Secure your seat belt before embarking on this ride! Just a warning to expect twists and turns aplenty on JJ Toner?s wild crime ride. The tension never leaves the page and Ben Jordan doesn?t spiral down into the abyss?he plunges into it head-first. And, lest you think all is grim on the Toner landscape, the black humor he employs at just the right moment lightens the read with delicious and perfect pitch. Get this book and then keep your eyes open for his next one!? – Les Edgerton renowned writing coach and author of Hooked, Just Like That, A Perfect Crime, The Bitch, The Rapist.
?Hits the ground running and doesn’t let up. Gritty realism and social commentary combine in a wonderfully well written, hard-hitting thriller.? Paul D. Brazill, award-winning Noir writer, author of Brit Grit, 13 Shots Of Noir, Drunk On The Moon, Guns Of Brixton.
NOTE: This book is available as an eBook only. I hope to release it as a paperback on Amazon before Christmas.
This book is for mature audiences and does contain adult material which can include profanity, sexual content and violence.
Instructions for Gifting a Kindle book can be found here on Amazon: Gifting Kindle Books