You write a crime novel – is your writing from experiences that you have had or did you just totally come up with the plot out of the blue?
I came up with the plot from my husband?s 22 years service in the British Army.  We were thinking about how to make a detective different, to stand out from the crowd as it were which is how we thought about setting the crime novels on an Army Barracks and using the Special Investigations Branch detectives.
Where did you do your research?
I researched the SIB on the internet and found two special reports written about them.  This was a great insight into their aims and objectives, their methods of working and the types of cases they take on.  Also my husband told me how they work in the army and how they fit into the structure as a whole.  Whilst he has never been arrested by the SIB lol he obviously knew their way of working and how other soldiers react to a visit by the SIB. 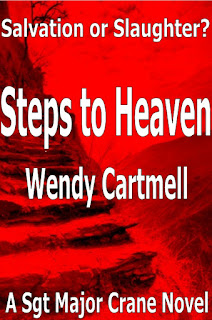 How did you develop your characters for this story?  Are they people you know, maybe yourself?

I based Crane in part on my husband and nephew who is in the Para chute Regiment.  I also took some character traits from other Army personnel I have met over the years.
How long did you work on this novel before you published it?
It took me about 6 months to write and then a further 6 months for several edits and all the formatting required to publish electronically.
Have you written other crime novels? If so what are they? If not, do you have plans to?
This is my first crime novel.  I have written the second 40 Days and 40 Nights which just needs a final edit and formatting and am in the process of planning a third.
Using a character from your book
Please tell me about your book:
I?m Sergeant Major Crane, a Special Investigations Branch Investigator, in the Armed Forces.  I?d describe myself as a proud, dedicated and experienced soldier, constrained by the Army structure, but adept at manipulating the system.  With my young team of Staff Sergeant Billy Williams and Sergeant Kim Weston, based at Aldershot Garrison, we investigate one of the most horrific cases we have ever taken on.  A young soldier who has deliberately murdered his wife and 6 year old son and then committed suicide.
I want to know what is behind this horrific act, but have to battle against cynical opposition from my Officer Commanding, Captain James Edwards who makes me investigate a different crime.  But I?m vindicated when a second copy cat murder suicide by a soldier in Colchester is followed by a third in Catterick.  Oh and in the middle of these investigations, my wife Tina wants a decision on whether we should start a family.  A decision I am unable to make, as I?m haunted by the deaths of the three young boys.
All three soldiers had served in Afghanistan and all had religious pamphlets, making me wonder what they wanted to be saved from?  Do the pamphlets offer salvation, or slaughter? Undeterred I doggedly pursue my theory that there is a religious connection between each murder/suicide, manipulating my colleagues as I go.  But am I at risk of going too far, putting those close to me in danger?
Story Blurb from back of book:
This is the first book in the Sgt Major Crane series.
Sergeant Major Crane, is a Special Investigations Branch Detective in the British Army, based at Aldershot Garrison. Crane is disturbed by the horrific case of a soldier called Solomon who, after recently returning from Afghanistan, murdered his wife and 6 year old son and then committed suicide.  It seems Solomon was attending a local Church, which encourages people to join by offering salvation to its members. But as Crane investigates and the body count rises, events take a darker turn and he wonders what the Church is offering – salvation, or slaughter?
Author Bio:
PERSONAL DETAILS:  I am 54 years of age, married with two grown up children.
WORK EXPERIENCE:  I was a Primary School Teacher before leaving England to settle in Spain nearly five years ago.  I previously worked in Sales, Marketing and Public Relations for large and small companies. 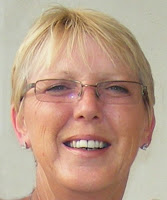 EDUCATION:  I attended Reading University as a mature student when I was 40 and obtained a BA Ed (Hons) Degree 2.1 in English and Education.  This Degree included two Creative Writing strands.

CURRENT WRITING:  My inspiration for Sergeant Major Crane was my love of crime writing and my husband?s 22 years service in the British Army.  I attend a lively Writing Group who unashamedly meet at beautiful beach side cafes.  I am currently working on the third Sergeant Major Crane investigation and also have ideas for a fourth.
PREVIOUS WRITING: As a teacher, I frequently wrote children?s stories for use in the classroom.  Whilst in PR I wrote press releases and wrote and gave presentations at Media Launches and Sales Conferences.  I also wrote and was Editor of a corporate in-house magazine.
PUBLISHED WORK:  Editor of Honeywell News, a national in-house magazine for Honeywell Control Systems Ltd.  Last year I had a short story published in a local English Speaking Magazine.
Where to purchase books:
Amazon US
Or
Amazon UK
Find out more on Wendy’s website:
Website
This book is for mature audiences and does contain adult material which can include profanity, sexual content and violence.
Instructions for Gifting a Kindle book can be found here on Amazon: Gifting Kindle Books