It’s Mention Monday!
Today we have with us
David Berger who is the author of
Task Force: Gaea- Finding Balance
Welcome David!!
Tell us a bit about yourself:
Do you work another job when you are not writing?
I’m a high school English teacher with AP English and IB English classes, all with seniors, as well as an online Latin teacher. I also teach a college course in College Success Strategies.
What is your favorite thing to do when you aren?t writing?
Reading. I know, that sounds like such a “geek” thing to say, but it’s true. As a teacher, though, I don’t get to read from my own list much since I’m either reading books I teach or grading papers. I was the kid under the blanket with the flashlight reading the Encyclopedia Britannica, and ever since then, reading has been one of my favorite pastimes. 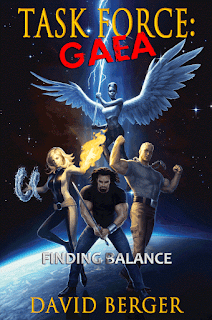 Where did the idea come from? How long did it take to write?

Comic books entered my life when I was about ten, back when I rode my bike to the stationery store since comic shops as we know them today weren?t around. I had also found, and couldn’t get enough of, Greek mythology (now an insatiable addiction). I discovered Saturday morning cartoons then, too, and then the Fates had me ensnared: I learned about Wonder Woman. All of these things together motivated me to write stories, and I found myself writing superhero stories. When I learned that Wonder Woman had ties to Greek mythology, that was it?I was hooked. My original idea for the story, ?The Olympus Corps.,? was more Star Trek than fantasy, but it had my heroes traveling from planet to planet, encountering monsters of myth and the gods. About fifteen years ago, I changed the premise of the story and the title, but kept the heroes. I had matured as a writer, too, so some of the original ideas wouldn?t work as well for me now. I finished the manuscript five years ago and began the editing process. That’s how Task Force: Gaea came to be.
What is it about?
The story twists the ancient myths we grow up with where what the reader knows about the Olympian gods, or thinks he knows, is challenged in fresh and curious ways. One god?s journey and actions unimaginably affect the entire universe. Basically, the book opens after Zeus and the gods have defeated the Titans, and Zeus is setting up Olympos with the gods. He makes some judgment errors, shall we say, that mess with the cosmos. Prophecies come about that tell of four mortals who will set right that which Zeus has done, but that won’t happen right away. Amidst this chaos, Apollo is cast out of Olympos, punished, and his journey feeds into what eventually happens to fulfill the prophecy. Four mortals do indeed rise to the challenge in the modern era, and they have a tremendous job to find the balance once again between order and chaos.
Your other work:
Do you have any upcoming projects in the works or other books that have been published?
I?m currently working on the sequel with an expected finish date of December 2012. I?m trying to put together a collaboration with other writers of short stories and poetry where the proceeds would benefit cancer research.
Video Trailers: