Skip to primary content
It is with great honor that I got a chance to talk to a wonderful Austrialian Author: Dean Mayes.  Welcome Dean and please take the time to say hello!
Dean tells us a bit about himself:
Do you work another job when you are not writing?

I’m an Intensive Care Nurse working in the fields of Pediatric Surgery and Neonatology, which means my patients are often incredibly small. Just last week, I was caring for a newborn that weighed a mere 800 grams. She was born at 24 weeks gestation and was so small I could hold her in the palm of my hand. I have been nursing now for about 16 years.
What is your favorite thing to do when you aren?t writing?
Spending time with my wife Emily and my two children, Xavier who is 5 and Lucy who is 2. I’ve just introduced Xavier to my sailing boat and as we head into our Australian summer, I’m hoping to get out on the water and teach him the ropes. He is really keen to learn too which is encouraging. My daughter, Lucy is a little young just yet for the boat but I think she will be just as keen to go out on the water as well. So we’ve got plenty to look forward to.
What is your favorite color? Why?
Lavender. Because it’s versatile and calming.
What is your favorite season? Why?
Spring, because our garden here at home comes to life. We have a number of rose bushes in our front garden that date back to the 1940’s which produce the most amazing flowers at this time of year, so I always look forward to spring’s first flush. We also have a pomegranate tree in the garden and it is looking really good with lots of blossoms on it which means that we’ll get a good harvest come summer. I have become quite adept at producing my own pomegranate juice so I’m looking forward to bottling some this year.
If you could live anyplace on earth, where would it be? Why?
I have lived the majority of my adult life in the Adelaide Hills of South Australia where there is an abundance of clean air and beautiful rolling green countryside. It’s very English and there is something about it that I find peaceful. Also, the Hills have become a mecca for food and wine producers and I am a culinary maniac so that’s another reason I am so enamored with the Hills region.
If you could have any car, what would it be?
I own a jet black 2005 Volkswagen Polo sedan which has a punchy little 1.6 liter engine. It’s pretty much my dream car so I have ticked the box there.
Dean tells us about his writing:
I discovered my love of writing in Mrs Furnell’s 3rd Grade English class when I was 8 years old. I initially sucked at it and we had this creative writing exercise where we would write down a series of words and would then have to incorporate them into a few lines on a subject of our choice. As I say, I sucked at it for the longest time but one day, I put together a few lines about a soldier’s experience of war and it kinda blew Mrs. Furnell away. I received a purple dragon sticker for my work and from there, I was hooked. Throughout most of my life, I displayed a passion for creative writing but it wasn’t until I finished university and I was able to take a break from the school books that my writing became a passion. From then on, it has been my dream to be a published author.
How many hours a day do you devote to writing? Do you have a set routine or do you write when the mood strikes?
Being a Nurse, Husband and Father who is on the go all the time, I can’t really tell you exactly how many hours per day I get in and nor do I have a set routine. I have found that often my most productive writing stretches have occurred at 3 in the morning when I’m at work and my patient is settled. I’m at the bedside all the time so I can take out my tablet and write. I also have a red leather journal which is steadily becoming filled with notes, pieces of paper that I’ve stapled to it, photographs of different places I’ve incorporated into my writing. I always carry that with me and keep it close at hand whenever an idea comes.
Is there some place special you like to be when you write?
I completed work on my first novel ?The Hambledown Dream? at my wife’s family retreat at American River on Kangaroo Island. The house there has a large balcony that looks out across a lagoon which is home to a colony of pelicans and it is the most peaceful place to sit with my work. I am often very productive when I get down there which is, sadly, no where near as often as I would like.
Do you listen to music or do you need a quiet place to write?
My first novel and the project I am working on now both feature music within their story and so I love to write with some music that is pertinent to the story. I actually find total quiet to be really distracting because I need to be able to conjure imagery up through sound and the emotion that sound evokes within me. Without that, the ideas don’t flow as readily.
Dean tells us about his book:
What is the name of it and is it part of a series or a stand alone novel? 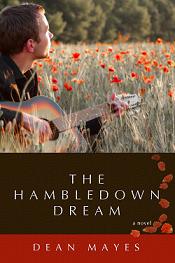 The Hambledown Dream is a stand alone novel which is my very first published work. The idea for The Hambledown Dream came about about 8 years ago when I was working on another project ? which ultimately failed. The idea was basically a ?what if? scenario ? What if a good and kind person, with the world at their feet, who has achieved everything suddenly lost it and the only way to get it back was through an individual who is their mirror opposite. That is to say ? someone who is destructive, mean and lost.
The Hambledown Dream took about 18 months to write from the time I fully committed to writing it. However I should add here that I initially published the story in installments to my blog because I had come to a point in my life where I believed that I would never be published. I put chapters of the story up once a week, just so I could get it out there from inside of me. But something totally unexpected happened. I suddenly found myself with an audience ? and a large one at that. And within that audience was a woman named Michelle Halket, a remarkable lady who is now my publisher. Her company ireadiwrite Publishing is fast becoming a notable indie Publisher with a roster of incredibly talented authors on it’s books and I am very proud to be a part of that firm.
What is it about?
The Hambledown Dream tells the dual stories of Denny Banister and Andy de Vries, although we experience the bulk of their journey through Andy’s eyes.
Australian Denny Banister had it all; a successful career, a passion for the guitar, and Sonya – the love of his life. Tragically, Denny is struck down with inoperable cancer and is destined to die.

Andy DeVries has almost nothing; he is alienated from his family, he moves through a dangerous Chicago underworld dealing in drugs, battling addiction; all while keeping a wavering hold on the only thing that matters to him: a place at a prestigious conservatory for classical guitar in Chicago.

As Andy recovers from a near fatal overdose, he becomes plagued by dreams – memories of a love he has never felt, and a life he’s never lived. Driven by the need for redemption and by the love for a woman he’s never met, Andy begins a quest to find her, knowing her only by the memories of a stranger and the dreams of a place called Hambledown.

Dean talks about his other work:
Do you have any upcoming projects in the works or other books that have been published?
I am currently working on my second novel which carries the working title ?Gifts Of The Peramangk?. This tells the story of an 8 year old Aboriginal girl named Ruby who lives in abject poverty and appalling domestic violence in the Northern suburbs of Adelaide here in Australia. In this depressing environment it would seem that Ruby’s hopes for the future are bleak indeed.
However Ruby has a gift. She is an undiscovered violin virtuoso ? having been taught the instrument by her ailing grandmother Virginia, who herself was taught to play during one of the darkest periods of Australian history ? the Stolen Generations and The White Australia Policy.
As Ruby becomes steadily more proficient amidst violence and despair, she and her gift are about to be discovered and she will be presented with a chance to escape her meagre existence. However, her chances will be threatened by an ingrained culture of racism, poverty and ignorance that will challenge her path towards a brighter future.
Where can readers connect with you?
I blog weekly at my official site Dean from Australia Dot Com (http://www.deanfromaustralia.com) where apart from keeping people abreast of what I’m doing, I like to mix it up a little with my own reviews of books, music, culture and current affairs. Readers can sample my writing through my short story section where there are a number of free shorts to read and they can sample a free audio version of my novel ?The Hambledown Dream? which I read myself. There are also a number of audio interview downloads from shows I have appeared on both here in Australia and overseas.
Where can we buy your books?
The Hambledown Dream is available for purchase in print and eformats directly from my site (Dean from Australia Dot Com) as well as Amazon, Barnes & Noble and Chapters Indigo