It’s Writer Wednesday and we are happy to have
Shawn Marvel
here with us today!
Welcome!!
Tell us a bit about yourself:
Do you work or go to school when you are not writing?
When I started writing I was going to school but I stopped when the curriculum got a bit too hard to balance with my writing. As an Army wife I?ve been a bit uprooted in the last few months, having moved from Germany to New York, and writing has been a bit of a project in itself. But I?ve been looking for a job and a boost for writing equally since arriving in New York. Hopefully I find both! I feel that working  or taking classes gives me a break, something to pull me away and keep me thinking about different things. If I?m not doing something else I?m bound to get writer?s block sooner or later!
What is your favorite thing to do when you aren?t writing?
I enjoy an array of things, I guess it depends on the situation. On a regular day I enjoy reading or taking walks. I enjoy interior design and little projects that I kind of make up as I go. For example, right now I?m refurbishing some black picture frames with scrapbook paper to make them more interesting. I like to be creative or active if I can. Up in New York we?re pretty far away from everything so it?s the simple things really.
What is your favorite color? Why? 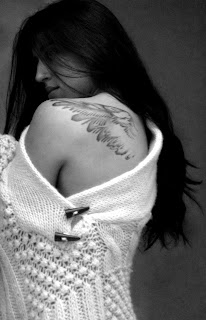 My favorite color is green, as a twin my parents dressed my sister and I in different colors to make it easier. She wore colors like red and pink, I wore green and blue. I like pink now a lot more than I used to but there?s something about green. Sage, light green, different shades. In fact, I have a pretty interesting story about the color green. My family; my parents, my sister, and me were at the beach when we were about five years old and Erika ran up ahead on the board walk and came back with a red shovel. It was a little damaged but she was so excited that she?d found it. I was pretty upset of course and declared that I was going to find a green one. My parents knew that by the end of our trip to the beach that they?d need to get me a shovel, otherwise they?d never hear the end of it. So we continued along and made our way down to the beach. A while later I ran up ahead and returned to my family with a big grin on my face and a green shovel in my hand. My parents were freaked out-like they had some kind of voodoo child. It?s a story that?s kind of stuck to me. I have ?green shovel moments? now and then where I find money somewhere or other strange things. I guess it?s a color that?s come to define me in some strange way.

What is your favorite season? Why?
I was born in July so I guess I?ve always loved summer best. I?m from New Jersey so we get all four seasons but summer is just refreshing and it feels slower somehow. I don?t rush inside because it?s cold; I linger under the summer sun. People seem happier in the summer time too.
If you could live anyplace on earth, where would it be? Why?
I would love to live in Venice. During my husband?s deployment to Iraq we drove down from our home in Germany and spent a week in Northern Italy and one of our first stops was Venice. It was breathtaking. The atmosphere, the colors, the buildings and architecture.  There are just no words!
If you could have any car, what would it be?

I would have the 1967 Ford Mustang Fastback. I actually incorporated that car in my latest novel, The Wanderer. But really, any American muscle car as long as it was the body style I liked. The camero, mustang, challenger, charger, I like them all. I?ve incorporate a few of them in my books actually, it?s a way of being able to have my dream cars without spending the money!

Tell us about your writing:
How long have your been writing? Was it a dream, a goal or is it just a hobby?
I?ve always loved to write but I really started to take it seriously four years ago when my husband enlisted in the Army. It was around then that I?d started reading?it took me a while to pick up the interest in reading. My sister and I both started writing our own books and helped one another as we went. Once my husband deployed I started writing Volition, my first published novel. From there I wrote its sequel, Severance and then shortly after publishing Volition I wrote The Wanderer. Writing was never really a dream, it ended up being a form of emotional distraction. I?d always enjoyed it, like I said, but I never imagined getting this far.
How many hours a day do you devote to writing? Do you have a set routine or do you write when the mood strikes?
I don?t devote a certain amount of time. I?ve tried that but I?m not very good at keeping a regiment. Sometimes inspiration strikes when I least expect it, like at one in the morning. Some days I don?t write at all. Other days I write for hours. Though I do hope to try and set up a schedule of some kind once things settle down here.
Is there some place special you like to be when you write?
I used to write at our kitchen table in Germany but now the only furniture we have is a bed. It?s not my desired writing spot. I would prefer a table top or desk. The keep is that I don?t strain my back by hunching or slouching. I?ve had to take a few days off on occasion because I wasn?t sitting the right way.
Is there anything out of the norm about your writing style?
I only use two fingers to type, like JRR Tolkien. I took a typing class in school but I just type faster this way and I never really picked up the proper way to type. I?m a lefty, you might blame that. Some people might argue that it?s not very fast but I wrote The Wanderer in only two months, so it?s not too bad all things considered!
Do you listen to music or do you need a quiet place to write?
I use music to help inspire certain scenes or help provide inspiration while I?m away from the computer and brainstorming, but I can?t fully concentrate if I?m listening to music while writing. I?ll play a little then stop and write and go like that until the music has provided what inspiration I want.
Tell us about your book: 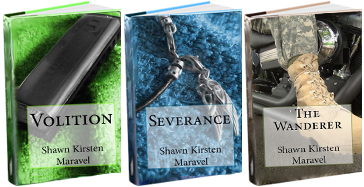 What is the name of your latest novel, and is it part of a series or a stand alone novel?
My latest novel is called, The Wanderer. It?s stand alone novel about a former Army soldier. He packs up his motorcycle and heads across country in the hopes of finding answers and closing up a few battle wounds if he can help it. He?s never been attached and has always been a loner in life. But when he meets Max Abrams he is faced with a fierceness he?s never been up against before. A woman who doesn?t try to change him or hold him back. A woman who cares for him and loves him for who he is. This, he finds, is even scarier than the women in his past who wanted to change him. In the book Landon meets a collection of people and shares his story while finding his way and realizing that he can only run for so long.
Where did the idea come from?
It sounds shallow but I really just loved the idea of a man in uniform on a motorcycle and wanted to write a story about it. I knew that he needed to be retired and that all he had in life was going to be his bike, the open road, and his battle scars. From there I needed to find a girl who could handle all of that and from there I had to figure out what their story would be.
Your other work:
Do you have any upcoming projects in the works or other books that have been published?
My first series, Volition and Severance fall under the YA Paranormal genre. They were published about a year ago. I?m still not sure if I?ll be writing a third book but I won?t be unless I decide on a flawless plot that blows the other two out of the water. Until then it?s just the two books.
Where can readers connect with you?
Facebook
Goodreads
You Tube Channel
Blog
Where can we buy your books?