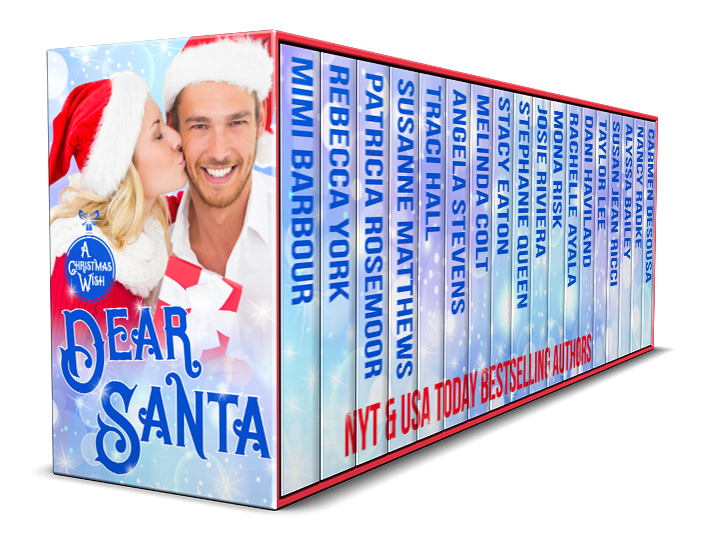 The Authors’ Billboard’s 2020 fabulous Christmas Box Collection, DEAR SANTA, is filled with 18 brand new stories about characters who have special wishes to ask the big guy during this season.
Most of us have had experiences when something we’ve desperately wanted is so close that Santa seems the perfect person to ask for the miracle.
When one believes, it’s amazing the conflicts that are overcome and the surprises that can follow.
You’ll be amazed by each of these fantastic holiday books full of Christmas cheer and thrilling romance we’ve written for your entertainment.
Mimi Barbour – Alone at Christmas: Being alone is Tara’s worst nightmare, especially during the holidays. Her wish comes true when she finds Mr. Right injured and stranded, but will they survive the dangerous storm?
Rebecca York – Christmas Miracle 1935: Can he trust her enough to help free her father from jail?
Patricia Rosemoor – Marrying Molly: Dear Santa, Please let me meet a McKenna man who will help me end Sheelin O’Keefe’s horrible curse on both our families. Molly Kavanaugh
Susanne Matthews – What Dottie Wants: All Ronnie wants is to give Dottie a great Christmas, but not being able to find the doll she wants may make that impossible.
Traci Hall – Christmas Kiss: Can a teenage crush become forever love?
Angela Stevens – Dear Sinterklaas: Dan had his heart stolen by a girl on summer vacation, now it’s Christmas time, and with a little bit of magic from Sinterklaas, he hopes to make his Christmas wish come true.
Melinda Colt – Saving Maddie: The only reason demons exist is because angels do, too.
Stacy Eaton – Finding Love with Dear Santa: All Faith wants is to get her life back on track.
Stephanie Queen – He Has Santa: A second chance hockey romance.
Josie Riviera – A Chocolate Box Christmas Wish: He’s been all over the world. She’s a home-town girl. Can a holiday wish bridge the gap?
Mona Risk – Dalia’s Christmas Wish: Will the doctor make the right decision between an angry fiancée and a medical emergency?
Rachelle Ayala – Toy Soldier Christmas: Can a toy soldier make her wish come true?
Dani Haviland – A Plate of Christmas Cookies: Is it too much to ask for a second miracle?
Taylor Lee – Please Christmas: Be Done: When his 7 year old son ran away looking for Santa… and all his teenage daughter wants for Christmas is for it to be done….the district attorney concedes not only did he lose his wife to cancer, but he was in danger of losing his children.
Susan Jean Ricci – Cruising for Mr. Right: Can a widow discover second chance romance aboard a Christmas cruise and make the right choice between two adoring men?
Alyssa Bailey – Christmas Wishes and You: Beth’s Christmas Wish of a Second Chance at Love could happen if only she would be willing to risk her heart… again.
Nancy Radke – Zsuzsa’s Christmas Wish: She asks Santa for a strong man to help corral a mule that won’t stay home, and is given a rancher who plans to corral her.
Carmen DeSousa – Chicago Hope: Aspiring journalist Maura Hall dreams of changing the world, but she’ll settle for Chicago.
**Only .99 cents!!**
Add to Goodreads
Amazon * Apple * B&N * Google * Kobo * Book2Read 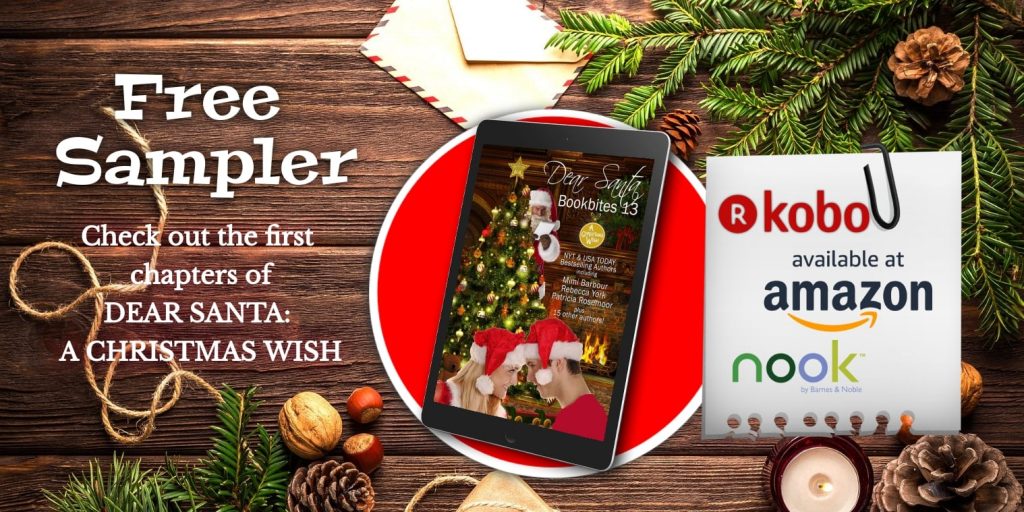 Get a FREE compilation of the “FIRST CHAPTERS” from the Dear Santa anthology!
Book Bites 13 – Dear Santa
Amazon * B&N * Kobo

Also, swing by the Authors’ Billboard for a monthly giveaway with
a $40 Amazon gift card and more!
https://authorsbillboard.com

Robin Cove has had enough of her boss, is over her boyfriend, and makes a split-second decision to leave it all behind. Too bad she didn?t check the weather forecast before she left. Stranded on the side of the road when her old car breaks down, Robin fears her impulsive action will be the death of her, as her body temperature steadily lowers to dangerous levels.

Matt Landry is slowly making his way home in the storm, when he finds an unconscious woman on the side of the road and rushes her home to his father Chris to save her.

Will Robin?s future bring her back to Chris and his kids? Or, will Chris lose the chance to have the love of a woman who will never leave him and the family he has always wanted?

Are you New to Audio? Listen for FREE on Audible!

About the Narrator: Lisa Beacom

My voice is my passion.

After earning a Bachelor of Arts in Dramatic Arts from the University of
Nebraska, I’ve worked as an actor on stage and on the radio over the last 20 years. During this time, I studied voice extensively, and I sing jazz and other styles?of music professionally. I am the featured vocalist on the album ?The Road? by the band Under the Bus.?

To keep developing my acting skills, I studied improv at The Second City, Annoyance and Comedy Sports Theaters among others. Most recently, I graduated from the ACX Master Class for audiobook narrators and am now focused on my work as a professional voice actor. As an audiobook narrator, I?ve recorded dozens of books that are now available on
Audible, Amazon and iTunes. I discovered that narration provides the perfect outlet for my unique skills
and talents.