It’s Writer’s Wednesday!
Today we have with us
Carol Tibaldi who is the author of
Willow Pond
Welcome Carol!!
Tell us a bit about yourself:
My name is Carol Tibaldi and I?ve been writing since I was eight years old. I live in Bayside, which is in the borough of Queens in New York City
Do you work another job when you are not writing?
I was a newspaper reporter for twenty years; now I do ghostwriting. I started working as a ghostwriter six years ago and have been successful.  I?ve worked on some interesting projects, but my own writing is what?s most important to me.

I love to read. I also like to hang out with friends, see a good film, dine out, go shopping and basically just have fun.
What is your favorite color? Why?
I have two favorite colors: blue and red, but I don?t like to wear them together. Whenever I wear red it just makes me feel good. Blue is peaceful
What is your favorite season? Why?
I love the colors of fall. The crisp air just makes me feel energetic and alive.
If you could live anyplace on earth, where would it be? Why?
I?d want to live near the water. Maybe Hawaii. My favorite place on earth is in a little town in Maine called Surrey where I spent my summers as a child and as a teenager. We had a summer home on a place called Toddy Pond. It?s mentioned in Willow Pond.
If you could have any car, what would it be?
Maybe a Porsche or a Jaguar in black. 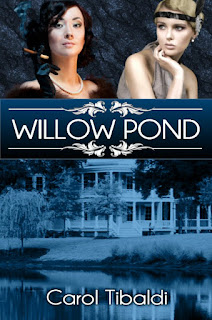 Tell us about your writing:

I wrote my first short story when I was eight and my father praised me so much that I decided to keep writing.
How long have your been writing? Was it a dream, a goal or is it just a hobby?
It was never a hobby though I enjoy it so much that most of the time it doesn?t feel like work. I guess you could say I?m pretty ambitious and have definite goals. I try to writer a set number of pages because I?m not a fast writer and I want to make sure I get a certain amount of work done each day.
How many hours a day do you devote to writing? Do you have a set routine or do you write when the mood strikes?
I usually write in the late afternoon or early evening because that works best for me. I know a lot of people write in the morning, but I?m not a morning person.
Is there some place special you like to be when you write?
Not really
Do you listen to music or do you need a quiet place to write?
Listening to music makes me more creative.
Tell us about your book:
Willow Pond is set during prohibition and is about a little boy who is kidnapped and what his family does to bring him home. His mother, Laura had just left her unfaithful husband and is just settling into a new life with her son, Todd in an apartment in Greenwich Village. During a visit with his father the child is kidnapped. Laura is frantic, of course and has no idea that the madman who has Todd plans to kill him.
Her aunt Virginia convinces the Police Commissioner that she must search for Todd and she pursues every lead, investigating one petty crook after another.
Laura’s lover Erich Muller is certain her aunt is behind the kidnapping, but Laura refuses to listen. Caught in an impossible situation, she must follow the clues, follow her heart and answer the question: Who really abducted her son?
What is the name of it and is it part of a series or a stand alone novel?
I wouldn?t call it a series, but I am working on the sequel to Willow Pond.
Where did the idea come from?
I?ve always been fascinated by the era of prohibition and speakeasies and wanted to write about them. I also researched the Lindbergh Kidnapping for a few years and planned to write about it, but never did.  The story of what happened to the Lindbergh baby is a lot different than what happens in Willow Pond, but its where the idea came from
How long did it take to write?
A little over two years.
Your other work:
Do you have any upcoming projects in the works or other books that have been published?
Willow Pond is my first novel and I?m currently writing the sequel.
Where can readers connect with you?

On Facebook: http://www.facebook.com/#!/pages/Willow-Pond-a-novel-by-Carol-Tibaldi/212483638798198
On Goodreads: http://www.goodreads.com/author/dashboard
Where can we buy your books?