It’s Writer’s Wednesday!
Today we have with us
Brook Syers who is the author of
The Brainiacs
Welcome Brook!!
Tell us a bit about yourself:
Do you work another job when you are not writing?
Yes.  I’m an internal auditor.  I know it sounds exciting and sometimes it is.  As soon as I leave work and get on the bus, I put on my cape and start writing.
What is your favorite thing to do when you aren?t writing?
Spending time with my wife and our 4-year-old son.  We do a lot of things as a family and I really enjoy that. 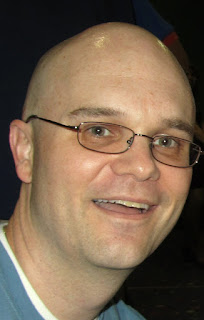 What is your favorite color? Why?
Green, probably because it’s the color of my eyes.
What is your favorite season? Why?
I live in Texas so it’s definitely not the summer!  I would have to say winter, which in Houston means “not as hot as the summer.”
If you could live anyplace on earth, where would it be? Why?
Austin, TX.  I graduated from The University of Texas and Austin is my favorite city in the whole world.  The food, entertainment, and outdoor activities are unrivaled.  There are film festivals, awesome live music, and it is surrounded by the beautiful hill country.
If you could have any car, what would it be?
That’s easy.  A Ferrari 458 Italia.  And I wouldn’t let my son near it because he’s messy.
Tell us about your writing:
How long have your been writing? Was it a dream, a goal or is it just a hobby?
I have been writing for almost a year.  It started as a challenge to myself to see if I could actually finish writing a novel.  Then it grew into something that I love to do.  I look forward to it everyday now!
How many hours a day do you devote to writing?
About an hour a half each weekday when I’m on the bus traveling to and from work.  I’m probably appear unfriendly to my fellow bus riders  because I pop in my earphones, turn my iPod on, and start pecking away at my laptop.
Do you have a set routine or do you write when the mood strikes?
It’s routine and I like it that way.  It makes me focus because I know I have a set amount of time to write.
Is there some place special you like to be when you write?
I don’t really have a preference.  As long as it’s not too loud and I can listen to music while I’m doing it.
Do you listen to music or do you need a quiet place to write?
Music all the way!
Tell us about your book:
What is the name of it and is it part of a series or a stand alone novel? 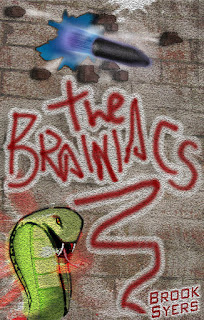 It’s called The Brainiacs and it’s the first book in a series.  How long the series goes depends on how much it connects with readers, which I think it will.  I’ve already written the sequel (The Brainiacs vs. The Ravens) and it should be published this summer.

Where did the idea come from? How long did it take to write?
Most people were bullied in some way in school, as was I, and it always upsets me when I see stories about students coming to school with weapons and committing acts of violence.  I asked myself what if there was a way to fight back without using violence?  That is how the idea for the book was born.  It took about 5 months to write.
What is it about?
There are two parallel stories.  The first involves a group of geeks that band together to fight back against the bullies in grade school.  The second story picks up after they have all graduated from college and decide to reunite to take on the vicious gangs that are threatening to destroy their hometown.  There is actually quite a bit of humor in the book to balance out the thrills.
Your other work:
Do you have any upcoming projects in the works or other books that have been published?
The sequel (The Brainiacs vs. The Ravens) should be published this summer.  I’m also writing something completely different right now.  It’s a sitcom written as an ebook.
Where can readers connect with you?
https://twitter.com/#!/BrookSyers
https://www.facebook.com/thebrainiacs
http://www.brooksyers.com/
Where can we buy your books?
Amazon