It’s Writer’s Wednesday!
Today we have with us
Mia Darien who is the author of
Deeper Than Skin
Welcome Mia!!
Tell us a bit about yourself:
Do you work another job when you are not writing?
I’m a Stay at Home Wife and Mother, so that’s my “job” even though it doesn’t come with a paycheck, and the hours never end! Still, I love it. I do housework and take care of my son through the day and write through the night.
What is your favorite thing to do when you aren?t writing?
I’m really a home body, and a geek. I love to read, I write as a hobby (online play by email role play) and when I have time, I play a little World of Warcraft.
What is your favorite color? Why? 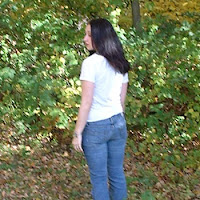 Oh dear… I’m not really sure I have one. I guess if I had to choose, I would say crimson or dark purple. Maybe because I’m a Scorpio. We like those colors! They’re dark and mysterious.
What is your favorite season? Why?
Spring and autumn. I love autumn, but hate that it means winter is coming. I love spring. When you live in New England, land of the miserable winter, you bloom every spring. My mother says that I’m such an extreme person that I need my seasons to be moderate, which is why I like the transitional “middle” seasons.
If you could live anyplace on earth, where would it be? Why?
Right where I am, although I wouldn’t mind some long term visits to the British Isles or the rolling green hills of Italy. I’ve never been to either, but they just sing to me when I see pictures or video. Or New Zealand. I’d love to go to where they filmed the “Lord of the Rings” movies.
If you could have any car, what would it be?
1980s Chevy Camaro IROC-Z, or the later Z-28… I’ve wanted one since I was a teenager. My husband did have an IROC when he was a teen, but he’d sold it by the time we got together. I was so sad!
Tell us about your writing:
How long have your been writing? Was it a dream, a goal or is it just a hobby?
I started writing (badly) when I was fourteen. Well, there were a couple silly little short stories when I was a kid, but at fourteen, I decided that I wanted to be a novelist when I grew up and so that’s when I really started trying to write books.
How many hours a day do you devote to writing? Do you have a set routine or do you write when the mood strikes?
Hours are hard to judge, but I try my damnedest to write every night. I can’t write while my kid is up, but fortunately he goes to bed early and I don’t, so I write after he’s asleep as much as I can.
Is there some place special you like to be when you write?
Nope. Just somewhere comfortable. I can write pretty much anywhere.
Do you listen to music or do you need a quiet place to write?
Nope. I actually watch television. Well, I listen to it. Always something I’ve seen before and generally something that might inspire me. I think I prefer dialog and stories to help me. I adore the show “Castle” and it always makes me want to write.
Tell us about your book:
What is the name of it and is it part of a series or a stand alone novel? 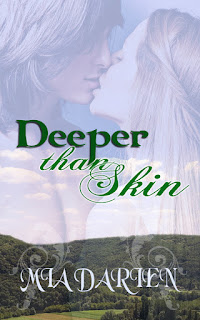 My newest story is called “Deeper than Skin” and it is part of my Romance line. It’s a standalone, historical romance.
Where did the idea come from?
A lot of places, really. It deals with the historical accounts of the Beast of G?vaudan, and I’ve had a long time fascination with that. The romance itself was actually inspired by one of my geeky online RPGs, a pair of characters written by me and a friend of mine at the time.
How long did it take to write?
That depends on how you look at it. You could say it took years from the first idea, through the thorny history is boasts, to the rewrite and now. Or two weeks, for the first draft of actual writing of this version. Or five months, including writing to publishing.
What is it about?
It’s about two people, Constance and Tristan, who are both ‘wounded souls’ that find one another during a time when the province of G?vaudan, France was being terrorized by a murderous beast that no one could seem to catch. This was from 1764 to 1767.
Your other work:
Do you have any upcoming projects in the works or other books that have been published?
There are two books out in my paranormal suspense (with a dash of romance) series, Adelheid: “Cameron’s Law” and “When Forever Died” with book three, “Voracious,” due out this Summer. The story “Sanctuary” is a post-apocalyptic erotic romance in my romance line that is also out.
Where can readers connect with you?
I spend most of my time either hanging out at my site or on GoodReads, as part of the Indie Book Club and Writers and Readers Club. I love to get email through my site and I also have a newsletter and all the usual social media.
Website/Blog: http://www.miadarien.com
Facebook: http://www.facebook.com/author.miadarien
Twitter: http://www.twitter.com/MiaDarien
Goodreads: www.goodreads.com/mia_darien
Where can we buy your books?
My stories are available through Smashwords, Amazon and Barnes & Noble. “Cameron’s Law” is available free.
Amazon Books: http://amzn.to/HTUhUg
Website Purchase Links: http://www.miadarien.com/?page_id=67