It’s Writer Wednesday and we are happy to have
Ahmad Taylor, author of Dark Side of the Moon
here with us today!
Welcome!!
Tell us a bit about yourself:
Do you work another job when you are not writing?
I am a freelance writer in the private security industry.
What is your favorite thing to do when you aren?t writing?
Besides constantly checking on my book sale statistics?
I love playing sports. I like the exercise and the competition.
What is your favorite color? Why?
This is gonna? sound super manly, but as a kid it was pink because I loved strawberry milk and I associated the color with the flavor.
As an adult I like most shades of blue. Navy is strong and powerful, and light blue is bright and inviting.
What is your favorite season? Why? 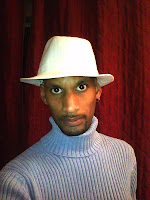 There is nothing at all like springtime in NYC (where I?m originally from). When the black snow starts melting, the air warms up, and the city is filled with beautiful people happy to shed their bulky winter gear.
If you could live anyplace on earth, where would it be? Why?
Somewhere in Scandinavia. I visited Denmark and Amsterdam for a month once and found the culture to be very warm and inviting, even when the weather is not.
If you could have any car, what would it be?
Maserati. It exudes power and confidence. Plus it is very fast and luxurious.
Tell us about your writing:
How long have your been writing? Was it a dream, a goal or is it just a hobby?
I started writing poetry in college and had one of my poems published in 2004.
I began writing short stories in college as well. I took several English Literature classes, where is where my true interest in writing fiction began.
How many hours a day do you devote to writing?
Between emails, blogs, and my working on the sequel to DARK SIDE OF THE MOON, between 4-6 hours.
Do you have a set routine or do you write when the mood strikes?
Both. I am actually still trying to find just the right schedule for myself in terms of writing and marketing, but I do try and set aside a few hours daily to write something.
I also do believe in ?striking while the iron is hot?, so when an idea pops up out of the blue, I try and run to a computer and run with it.
Is there some place special you like to be when you write?
Not really. I write wherever I have space in my home. I like to stretch out a bit and blast my music, so wherever that is possible is where I will get going.
Do you listen to music or do you need a quiet place to write? 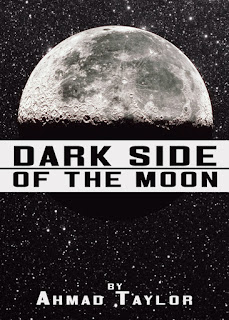 I like darkness and loud music when I?m working.
Tell us about your book:
What is the name of it and is it part of a series or a stand-alone novel?
DARK SIDE OF THE MOON. (DSOM)
I am currently working on the follow-up novel, filled with lots more suspense and tons of thrills.
Where did the idea come from? How long did it take to write?
A dream.
One night last March I had a crazy dream about my sister. She and I were working aboard a ship in outer space when suddenly she went missing. The rest of the dream was filled with me trying to find her and trying to convince all those around me that she actually existed and was not a complete figment of my imagination ? typical Twilight Zone episode.
When I woke up from the dream I had quite a sweat going. After a few hours of unsuccessfully trying to fall back to sleep, I finally grabbed a pen and pad and jotted down a plot-outline. At first I was only writing down quick thoughts and ideas, but when it was all said and done, I had 8 pages of detailed notes on character development, plot flow and had something I genuinely could turn into a story, so I grabbed my laptop, my outline and began to create.
When writing I started pulled several 18+ hour sessions and had a first draft in 27 days. After another 2 ? months I had a 90% complete manuscript. Unfortunately, I put it down for several months after that, and therefore did not complete it and publish until January, but in actual writing, editing, proofing time? 4 months total.
What is it about?
DARK SIDE OF THE MOON is an action-packed Suspense/Thriller about government agent Derrick Thomas who awakes from a disturbing dream to find a message from his father asking for help. As he sets out to lend his assistance he quickly discovers that not only can he not find his father, but that a clandestine government agency is out to derail his search before it can begin. After the murders of two of his father?s colleagues and the further disappearances of his mother and sister, Derrick is thrust into a fight for his own life and a struggle to uncover details of a secret government experiment which his family may be part of.
Will he be able to save them and uncover the truth before he becomes the next victim of an organization bent on keeping him silent?
Your other work:
Do you have any upcoming projects in the works or other books that have been published?
?Are you afraid of the dark?? Well you should be? I am currently working on the action-packed sequel to DSOM.
Where can readers connect with you?
You can check out webpage where you can find information about current and future projects; excerpts from DSOM; 5-star reviews; current FREE Giveaways; and my general whimsical musings via my blog at:
http://www.ahmaddarkside.blogspot.com
Facebook:
http://facebook.com/DarksideAhmad
Twitter:
@AhmadDarkside
Goodreads:
http://www.goodreads.com/user/show/7553921-ahmad-taylor
Google +:
https://plus.google.com/u/0/me/posts
Where can we buy your books?
DSOM is currently on sale at Amazon:
Thank you for Joining us today!